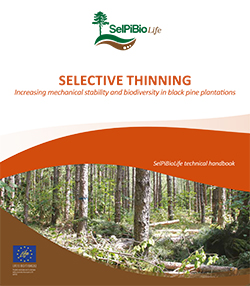 This publication describes the objectives and the silvicultural treatments proposed by the Project SelPiBioLife for black pine plantations of the Italian Apennines.

The proposed silvicultural treatment is a thinning method that aims at optimizing the stand characteristics. In particular, the thinning enhances the overall mechanical stability (protective function), the tree growth rate (productive function) and the structural differentiation (biodiversity function).

Furthermore, the handbook describes the selective technique adopted which focuses on a positive selection of the candidate trees and the removal of direct competitors in the dominant storey. The main goal of the selective thinning is to open the canopy allowing trees to receive more light for photosynthesis and, simultaneously, determining changes in the light, water and temperature regimes at the soil level. Consequently, the thinning enhances the establishment of herbaceous-shrub vegetation, the biodiversity of various soil components (flora, fungi, bacteria, nematodes, mesofauna and arthropods) and the overall functionality of the ecosystem.

The experimental protocol involves comparison of selective thinning with traditional thinning (thinning from below) and with no treatment. Moreover the handbook describes the methods used for the analysis of forest floor and soil biodiversity.

Finally, the publication describes the two pilot areas (Pratomagno e Monte Amiata) and illustrates characteristics and results after the realization of the first silvicultural treatments.